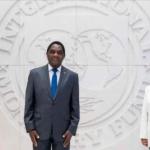 Hakainde Hichilema, the president of Zambia, has announced that the Southern African country has signed a US$1.4 billion dollars with the International Monetary Fund (IMF).

He said the money will enable Zambia to honour its debt obligations, something that’s essential in attracting foreign capital. He said this Saturday:

Glad to announce that discussions around #Zambia debt are starting to bear fruit. We have signed an IMF deal for $1.4 billion which will enable us to restructure our commercial and bilateral debt while attracting foreign capital.

Local media quotes Allison Holland, IMF mission chief for Zambia as saying the agreement is based on the authorities’ plans to undertake bold and ambitious economic reforms. A statement attributed to Holland reads in part:

The staff-level agreement is subject to IMF Management and Executive Board approval and receipt of the necessary financing assurances. Further details on the agreement will be released on Monday.

President Hakainde Hichilema, who was elected in August, had started talks with the IMF in early November.

Situmbeko said this will be in addition to the US$1.3 billion special drawing rights (SDRs) that was received in August 2021.

Zambia’s external debt includes around $3 billion in international bonds, $2.1 billion to multilateral lending agencies such as the IMF and another $3 billion to China and Chinese entities.