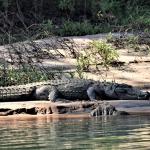 A fishing expedition at night ended in tragedy after a 31-year-old man from Zaka in Masvingo was killed by a crocodile on Monday last week.

Farai Mashindi of Mapindu Village, Chief Bota, had gone fishing with his brother, Trust Mashindi (35) at Manjirenji Dam using nets when the crocodile attacked him.

On 15 November around 6 pm, Farai and his brother went fishing at Manjirenji Dam using nets and at around 8 pm Farai was attacked by a crocodile.

Trust tried to help his brother but the crocodile disappeared with him in the water.

Insp Dhewa said Trust rushed back to the village and informed fellow villagers and a report was made to the police. He said:

The community, the police and officials from Zimparks conducted a search at the dam. At around 5 pm the following day the body was retrieved with a ruptured stomach and a broken left hand.

Insp Dhewa urged members of the public to desist from fishing in crocodile-infested water bodies.

shem it happensaccordingly in life