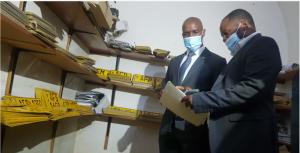 The Zimbabwe Anti-Corruption Commission (ZACC) is conducting rapid compliance checks at the Central Vehicle Registry (CVR) offices around the country following allegations of massive corruption at the department in the issuing of number plates and licence discs.

In an interview with State media, ZACC spokesperson Chamunorwa Murava said ZACC is determined to eradicate all forms of corruption at CVR. Said Murava:

The ZACC Compliance and System Review team is on the ground doing rapid compliance checks at the Central Vehicle Registry department. The exercise is thorough in light of the public outcry.

This process will help us come up with viable recommendations that will improve efficiency at the department.

Once the exercise is complete, we will issue a statement on the findings and recommendations.

The acting permanent secretary in the Ministry of Transport and Infrastructural Development Amos Amos said:

We are targeting 1 500 per week until April 2022 when plate material stocks are exhausted.

We are ordering more material in March 2022 to cover the remainder of the year.

CVR employees are accused of demanding bribes and this has caused unnecessary delays in the issuing of the plates.

On 15 January, the Zimbabwe Republic Police (ZRP) launched an operation targeting unlicensed and unregistered motor vehicles and as of Friday, about 20 000 arrests had been made.

What does the top brass at the CVR spend their time at work on? Did they know about the material available versus the number plate output? Where they aware of the numbers of people always outside the entrance at all times? Did they adequately supervise those under them? If corruption exists at CVR is the top brass involved? If not, it may mean that they are so comfortable with their salaries to the extent of forgetting there are people who need supervision under them, whose welfare they should also have been looking at from their position of comfort.

US$124.00 Harare
ITAI ZVAMANGAMUCHIITA 5 months ago

ZACC must also camp at VID

,, We are targeting 1 500 per week until April 2022 when plate material stocks are exhausted,,

Plus ku pension office and NSSA

ZACC must also camp at ZRP