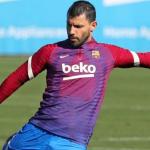 Barcelona coach, Xavi Hernandez, has said he has not been officially told about claims that Sergio Kun Aguero plans to retire from football following his cardiac arrhythmia diagnosis.

Aguero was forced to leave the pitch in Barçelona’s 1-1 draw with Deportivo Alaves with chest pains and was initially advised by doctors to rest for the next three months.

Barcelona released a statement, confirming that the 33-year-old former Manchester City was set for a 3-month layoff, to undergo a ‘diagnostic and therapeutic process’ under the watch of Dr Josep Brugada.

There have been reports that the Argentine international intends to hang his boots.

As reported by Spanish journalist Gerard Romero, the South American’s heart problems are so extensive that they have forced him into the difficult decision to hang up his boots for good.

Such claims were subsequently backed by Samir Nasri a short time later, when the Frenchman, a former teammate of Aguero’s at Manchester City, revealed to Canal+ that ‘unfortunately he has confirmed that he is retiring.’

Meanwhile, Xavi suggested that Aguero has not yet communicated about retirement. Xavi said he and his staff remain hopeful that the striker could yet mark his return to the pitch:

About Kun Aguero I don’t know anything new, I spoke with him the other day, he was relaxed. What came out is not true. We have to wait and see but we are still hoping that he can come back and play football.

Aguero who arrived at Camp Nou in Summer has one goal, against Real Madrid, in five matches.