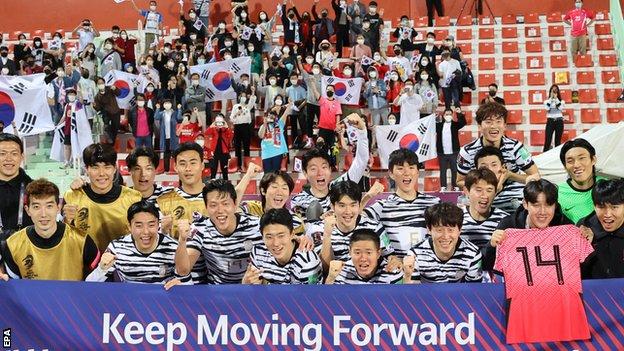 South Korea have qualified for a 10th successive World Cup after securing their place in Qatar with a 2-0 win against Syria.

They are second in Group A in Asia qualifying behind Iran, who have already claimed a spot in the finals.

However Australia drew 2-2 with Oman and sit third in Group B, with only the top two qualifying automatically.

They are four points behind leaders Saudi Arabia and three adrift of Japan but have games against both to come.

Japan beat Saudi Arabia 2-0 in their latest match, with Liverpool forward Takumi Minamino scoring one of their goals.

The two third-placed sides in each group of Asia qualifying will meet to decide who enters an intercontinental play-off against the fifth-placed side in South America.

The top four in the South America qualifying group secure a place at the World Cup and leaders Brazil and Argentina have already made sure of being in the Middle East in December.

Ecuador, in third, were held to a 1-1 draw by fifth-placed Peru, while Uruguay secured a convincing 4-1 win over Venezuela to move fourth.

Chile beat Bolivia 3-2 to make up ground on their rivals and improve their hopes of qualification.