World Cup 2022: Qualification status for Qatar across the globe 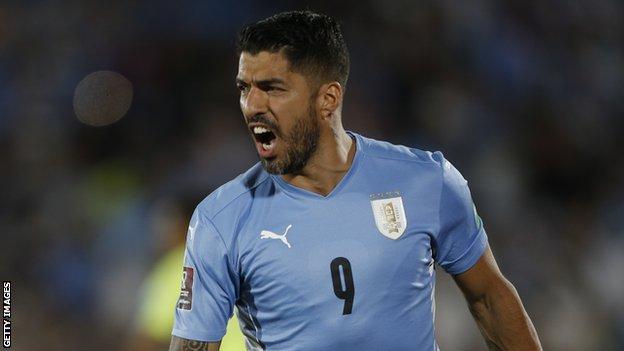 The World Cup in Qatar is now only nine months away - but there is still plenty to decide before the tournament kicks off.

Fifteen teams have already secured their spot in the tournament that starts on 21 November, but that means there are still 17 places up for grabs and some notable nations are struggling to make it.

To make sure the World Cup qualifying process can finish this summer, Fifa created an extra international window at the end of January into February.

So, while European clubs were afforded a winter break with their qualification up to date, it was a key couple of weeks for those in South America, Asia and the Concacaf region, which features sides from North and Central America and the Caribbean.

BBC Sport takes a look at how qualification is panning out.

Uruguay back on track but Colombia in trouble - South America

Uruguay entered the international window seventh in South American qualifying after four consecutive defeats and in real danger of missing out on Qatar.

The two-time World Cup winners have responded with back-to-back victories over Paraguay and Venezuela.

They are now fourth in the table with two crucial matches in March remaining as they face Peru, who are just one point behind them in fifth, followed by Chile, who are two points further back in sixth.

The top four South American nations qualify directly, while the fifth-placed side can advance via inter-continental play-offs featuring three other nations from Asia, Concacaf and Oceania. Brazil and Argentina are already through.

In contrast to Uruguay, Colombia are now in dire trouble after defeats by Peru and Argentina dropped them from fourth to seventh, five points off Uruguay.

Colombia, who have qualified for the past two World Cups, face Bolivia and Venezuela in their remaining games.

Paraguay and Venezuela have been eliminated from contention, while eighth-placed Bolivia can now only reach the inter-continental play-off spot at best.

The end of a long wait? - Concacaf

Canada have taken a huge step towards making their first World Cup finals since their only appearance in 1986 during this international window.

After a 2-0 win over Honduras, they beat the USA by the same margin on Sunday and remain unbeaten at the top of the Concacaf table on 22 points from 10 games, with four matches to play.

Canada, managed by English coach John Herdman, are now four points ahead of the USA, with Mexico - who were held to a goalless draw by Costa Rica on Sunday - also on 18 points but currently third on goal difference.

They could clinch qualification on Wednesday if they beat El Salvador and the USA also lose to Honduras, Panama lose to Mexico and Costa Rica fail to beat Jamaica.

Three teams qualify automatically and fourth place goes into the inter-continental play-off against the winner of the Oceania play-off.

Panama are fourth on 17 points, while bottom-placed Honduras are already eliminated.

West African rivals Nigeria and Ghana will play each other for a place at the World Cup in arguably the pick of a number of tantalising ties following the draw to decide Africa's five places in Qatar.

Elsewhere Sadio Mane's Senegal will play Mohamed Salah's Egypt, while the only team in the draw to have never been at a World Cup, Mali, face Tunisia. The matches will take place at the end of March.

Australia have qualified for the past four World Cups but, lying third in Group B with only two games remaining, face a tough challenge to reach Qatar 2022.

The top two teams in each group qualify automatically for the World Cup, with the two third-placed sides playing off for a place in the intercontinental play-off against the fifth-placed side in South America for a spot at the finals.

The Socceroos twice surrendered the lead as they were held 2-2 by Oman on Tuesday and are now three points off Japan in second, with leaders Saudi Arabia a point further ahead.

Australia can still overhaul their rivals as they face Japan and Saudi Arabia in March, but will need a marked improvement in form.

Iran and South Korea have both secured qualification for the finals from Group A.

Leaders Iran qualified with victory over Iraq on 27 January, while South Korea beat Syria on Tuesday to reach their 10th successive World Cup.

All to play for - Oceania

Oceania will stage a nine-team tournament in Qatar in March to decide which team advances to the inter-continental play-off for a spot at the World Cup finals.

The winner of the 14-30 March competition will face the fourth-placed team from the Concacaf region.

New Zealand were the last country from the region to qualify for the World Cup when they played in 2010. They missed out on a place in Russia in 2018 after losing to Peru in a play-off.

An exit for the European champions? - Europe

There is still plenty to play for in Europe with the likes of Italy, Portugal, Wales and Scotland all facing play-off semi-finals in March.

There will be at least one big casualty with Italy and Portugal due to meet in one of the finals - if they both get past their semi-finals.

Hmm some mouth watering fixtures in the playoffs. I'm looking forward to the match pitting Portugal & the current European champions, Italy. A MUST WIN MATCH for the Portuguese. A world cup without Cristiano Ronaldo is absolutely UNIMAGINABLE!! Potentially this could be his last. I'm putting every penny on the Portuguese faithfuls...