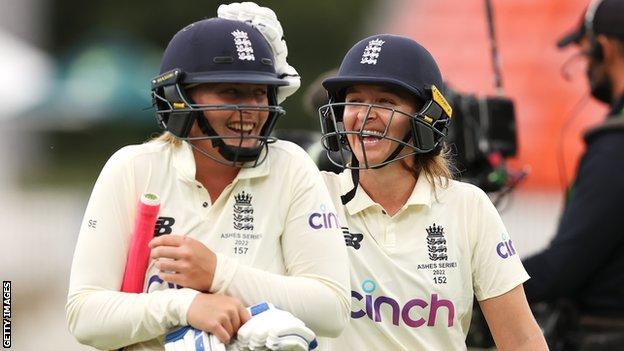 "There is a moment when we walk off I hit her head with my glove.

"She said 'I need to be honest with you Crossy. I had my eyes shut for that last ball - I was looking at the sky with my eyes shut'."

The one-off Ashes Test ended in the most dramatic of circumstances on Sunday with England looking set for a stunning win before a collapse in the final hour left them clinging on for a draw.

Speaking on her BBC podcast No Balls, Cross said Ecclestone - in a manner akin to Ben Stokes when batting with Jack Leach in the 2019 Headingley miracle - could not watch as she defended the final delivery.

"I would have been worse if I had to try to score runs," Cross added.

"In my head there was a little bit that could imagine me hitting the runs and having the winning moment with Soph."

Chasing a record 257, England were cruising requiring 45 from 60 deliveries but lost six wickets for just 26 runs.

The ninth wicket fell with 13 balls to go and England had to decide whether to try to score the remaining 13 runs or play defensively and try to survive for a draw.

"I turned to Lisa [England coach Lisa Keightley] and said 'what am I doing?'," Cross recalled.

Cross said she had "never seen Ecclestone's face like it" when she arrived in the middle and describes how the conversation with her batting partner went.

Cross: "Sophie we don't get out. We absolutely do not get out."

Cross faced 12 balls at the end as her side fell short of the target by 12 runs. Had they won, England would have taken a 6-4 lead in the Ashes series into the final three one-day internationals. Instead, they go into the matches trailing by that score.

A win would have also set a new record for a fourth-innings chase in women's Tests and given England their first success over Australia in the longest format since 2014.

"I came off the pitch and I was quite happy because I had done my job," said Cross.

"Then I saw all my team-mates' faces and it was almost like we lost. It was a complete mix of emotions.

"The dressing room afterwards was really, really quiet. There were a lot of tears.

"It was a game neither team deserved to lose, a draw didn't feel like the right result and both teams could have won.

"We got into a position we could win and in some way that is worse.

"We knew it would have been something special.

"The fact we didn't lose it was a decision that had to be made to keep us in the Ashes as well."

Australia now only need to win to win one of the three ODIs, with the first on Thursday (03:10 GMT).