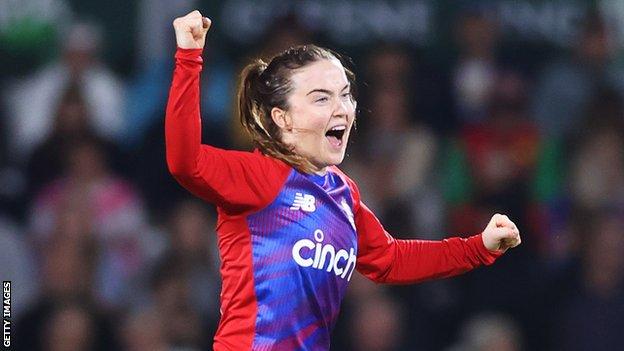 When England's Mady Villiers lay in bed with her foot up in the air, recovering from a stress fracture, she stumbled across an online lecture about veganism.

That was in 2019 and it would change her life: "trapping" her and sending her off an adventure to find out more.

For 23-year-old Villiers, animal welfare was what stood out most.

"I never used to think about the food I was eating," said Villiers, who is part of the England squad currently in Australia competing in the Ashes series.

"I would never think about the life that it had. It was quite selfish really."

Her switch to a plant-based diet happened overnight.

"My mum thought I was insane. I remember the next day we went to a carvery and mum was like 'Can't you just start it tomorrow because there's no options here?'

"I was like no, it's not a diet! I'm not going to start it on Monday mum, it's different."

Professional cricket on a vegan diet

Villiers quickly realised she had to find new ways to get the balance in her diet her body needs - and thankfully for her, and England, she says it hasn't had a detrimental affect on her cricket.

Essex-born Villiers is one of the brightest young prospects in the game; taking 14 wickets at an average of just 17 in her 17 T20 internationals to date.

The off-spinner is still to make her one-day and Test debuts.

"Becoming vegan hasn't impacted my game at all in any way, shape or form," Villiers said. "If anything, I feel better. I recover a lot quicker; I didn't expect these benefits to happen.

"I'm not saying I recover quicker because I don't eat meat, but because my vegetable intake is higher, I'm not as stiff anymore. On the whole, I feel a lot more refreshed when I wake up."

The biggest worry Villiers had was whether her lifestyle change would affect her relationship with teammates. She was concerned about simple things like going out for a meal together.

"Now they always check beforehand if there's an option for me which is really reassuring because it did used to really bother me that they wouldn't be able to go to restaurants that they wanted to go to," said Villiers.

Villiers' teammates were more than just accommodating. Some did research of their own and respect Villiers for her choice.

"My team-mates love it. Every now and again, they'll eat the vegan options," says Villiers.

"It is pretty cool to be honest that they think about things like that because it takes worry off of me. A lot of the girls eat a lot less meat than they used to.

"I don't know why that is but everybody just seems now to be more aware of their meat intake."

Villiers' vegan journey began online and to keep it up, she uses social media for inspiration.

"Instagram is very good for vegan inspiration and Tik Tok as well actually. I never thought that Tik Tok would provide me with some of my meal inspiration but it actually does," Villiers explains.

"If you search vegan food on Instagram, you'll be scrolling for days... so approach with caution!"