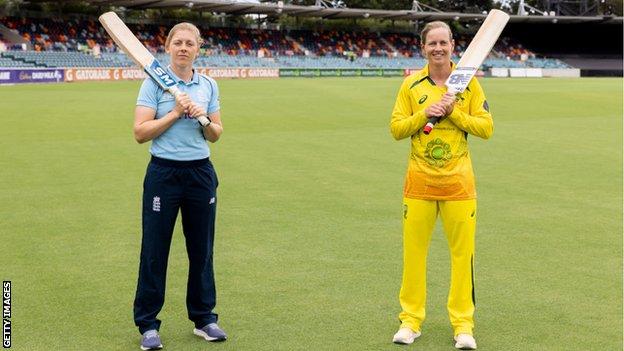 After the intense finale to a match both sides came so close to winning, the players have had some time off before the three ODIs that will decide the multi-format series.

The first ODI is in Canberra on Thursday, followed by two matches in Melbourne, on Sunday and Tuesday.

"We've had a couple of quiet days as a group," said Australian captain Meg Lanning

"There was a lot of discussion on Sunday night, particularly about that last hour.

"But the overwhelming feeling was that it was a pretty resilient fightback from the group to get back into a position to draw the Test, and we could have won it at the end there.

"Both sides fought extremely hard and it turned out to be one of the best Test matches ever."

England captain Heather Knight had a similar outlook, with a bit more disappointment at the way her side's promising chase fell short.

"We were in a great position to win it, and at the end it felt a little bit like a loss," she said.

"But the way we went at that chase showed some real character from the girls, that we can do that, and that we want to go at the Australians. I'm so pleased that the girls put themselves out there.

"There was quite a lot of emotion flying around. We released that by having some time together. We had a couple of days off and then we had a debrief today.

"I've learned in my career that if you don't park a game like that, it can be detrimental to the next one."

With that done, there is no time left to think during this rammed series schedule, as the teams have to clear the Ashes with enough time left to quarantine before entering New Zealand for the upcoming 50-over World Cup.

"We've switched into one-day mode, and understand how important these games are," said Lanning.

"We want a contest, we want really competitive cricket, and that's what it has been through the series so far.

"Both sides need to win, that's the mindset we're going out there with."

Australia's need is less pressing than England's. The home team lead the series on points 6-4, and each ODI is worth two more points.

Winning one match would be enough for Australia to retain the Ashes trophy, and winning two would win the series. England must sweep the lot to win the trophy back.

"When we do go hard at them we can put them under pressure. We saw a few cracks."

"Megan will come back in, and we're working out what the other bowling line-up looks like. She's keen as mustard to get back into it," said Lanning.

"[Perry] will be in our 50-over side, she'll be batting at four as she has done for a long period of time. I know she's eager to make a big impact on this part of the series."

England will weigh up bringing back batter Danni Wyatt to supplement a powerful line-up. But it won't be at the expense of Sophia Dunkley, who impressed with her 45 from 32 balls at a pivotal moment of the Test.

"I saw her as a 13-year-old when she was opening the batting for Middlesex and thought that this girl can seriously strike a ball," said Knight.

"The thing that's impressed me the most the past couple of years is how she's worked on her composure, her mental game at the crease, and how she deals with that pressure. It was really pleasing for her to show everyone what she can do in Australia."

Soreness and tiredness aside, both camps have fit squads to choose from for the ODI, and in returning to Manuka Oval they can expect a good surface for what is likely to be a high-scoring game.

This time around, they know that one side will walk away with a win.