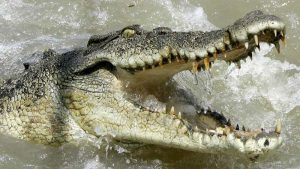 A 40-year-old Mbire woman had her hand ripped off by a crocodile whilst doing laundry in Angwa River yesterday.

Esineri Kadziyanike of Chief Chisunga village was rushed to Angwa clinic after losing her left hand in the attack. A villager identified as Mr Fresher Muodza confirmed the sad development. He told The Herald:

She was washing clothes in Angwa River when suddenly a crocodile attacked her and ripped her hand off. She is currently admitted at Angwa clinic.

Human-wildlife conflict remains a crisis in the Mbire area and nationwide.

In January, Alexander Chimedza from Kariba, Mashonaland West Province, was admitted to a hospital in Zambia after he was seriously injured in a triple crocodile attack on the edge of Lake Kariba.

He suffered a broken hand, injured thighs and broken fingers after he was attacked by three crocodiles on the shores of Lake Kariba.

In December, a newly married woman from Mberengwa lost her right leg after she was attacked by a crocodile while fetching water at Mazwi Dam.

so sade hope she will recover