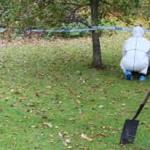 Zimbabweans have expressed concern over the increase in the number of murder cases around the country amid reports that the body of a female adult was discovered near Norton.

The Zimbabwe Republic Police (ZRP) say the body was discovered along a rail line and had bloodstains all over. Reads a police report:

Police in Norton are investigating circumstances surrounding a murder case in which a body of a female adult was found along the rail line near Family 24, with a deep cut on the head and bloodstains all over the body, on 28/12/21.

Anyone with information to contact any nearest Police station.

In a different case, the ZRP is investigating circumstances surrounding the death of Simani Nyathi (12) of Mkubo Village, Nkayi that occurred on the Boxing Day around 1400 hours. Pindula News presents a police report on the case:

The victim is said to have been playing a swing game with his cousin sister (9) when he was allegedly trapped and strangled to death by the swing rope. The body of the victim was found hanging from a tree in a kneeling position with a rope tied around his neck.

Some bruises were observed around the victim’s neck and froth coming from the mouth.

Responding to the report, Zimbabwenas on social media expressed concern and called upon the government to take necessary action to address the issue.