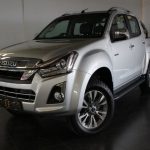 The Zimbabwe Republic Police (ZRP) has arrested a 53-year-old woman for smuggling her late husband’s Isuzu Double Cab from South Africa through an undesignated entry point.

The accused, Diana Simbisa Ruswaya, was arrested on Tuesday after the law enforcers had tracked the vehicle to Masvingo. Pindula News presents the police statement on the case:

On 14/12/21, Police in Beitbridge arrested Diana Simbisa Rwauya (53) for a case of smuggling. The suspect smuggled an Isuzu Double Cab vehicle [JTK714MP] registered in the name of her late husband through an undesignated crossing point along the Limpopo River, Dite area.

A follow up was made through a tracking system leading to the recovery of the vehicle in Mucheke, Masvingo and the subsequent arrest of the suspect who tendered a forged temporary import permit and customs receipt to the police.

Smuggling has been rampant in recent years and in some cases, Zimbabwe Revenue Authority (ZIMRA), Zimbabwe National Army (ZNA) and or ZRP officials are accomplices.

Zimbabwe is losing an estimated US$1.5 billion every year through illicit trade, an issue that has remained difficult to solve since the country has porous borders and also because law enforcers are aiding those violating the laws.

IT IS A SAD STORY, ESPECIALLY THAT SHE LOST HER BETTER HALF.

I DO NOT UNDERSTAND WHY MRS DIANA SIMBISA SMUGGLED HER LATE HUSBAND'S CAR. WAS THIS CAR LEGALLY OWNED BY HER LATE HUSBAND. DID SHE SMUGGLE THE CAR TO AVOID DUTY ONLY OR THERE WERE OTHER ISSUES? THESE ARE THE QUESTIONS SHE WILL HAVE TO ANSWER TO POLICE.

MRS DIANA SIMBISA MAY LOSE THIS CAR BECAUSE IT IS THE NORM WITH ZIMRA TO IMPOUND SUCH GOODS AND FORFEIT THEM TO THE STATE. SHE MUST ENGAGE GOOD LAWYERS TO HELP HER EXTRICATE THE CAR FROM THE JAWS OF ZIMRA.

MY PERSONAL OPINION IS THAT MRS DIANA SIMBISA CREATED THIS PROBLEM FOR HERSELF.