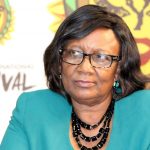 Memory Mukondomi who is testifying in a corruption case of former Public Service minister Priscah Mupfumira has made a U-turn on her earlier testimony claiming she had not been pressured by the ex-minister.

Mupfumira and National Social Security Authority (NSSA) director Barnabas Matongera are jointly charged and accused of flouting tender processes by entering into a housing project prejudicing NSSA of US$6.5 million.

Memory Mukondomi had on Tuesday told magistrate Ngoni Nduna that Mupfumira had pressured her by giving her 48 hours to complete the deal.

But Wednesday under cross-examination by Mupfumira’s lawyer Admire Rubaya, she said that the former minister was not involved in the meeting that sealed the deal.

Mukondomi, who was the director of finance and administration in the Public Service ministry, then headed by Mupfumira and now with the Finance Ministry, had on Tuesday accused the former minister of influencing NSSA into partaking the project saying she was under instructions.

Rubaya, however, asked Mukondomi if pushing for the completion of the agreement was tantamount to forcing them to disregard the procurement process to which she said it was not.

Mukondomi said Mupfumira never sat on the board and that she was a policymaker and the ministry’s political figurehead. Mukondomi was the link between NSSA and the Public Service ministry.

Matongera’s lawyer, Richard Masinire questioned Mukondomi’s credibility pointing out that she was sitting on the NSSA board from 2012 yet she told the court that she was seconded there in 2014.

He further pointed out that such agreements did not require procurement processes, producing the June 2017 board minutes which Mukondomi agreed to have been part of. The minutes read:

A new housing project structure was being proposed for the properties division… The houses will be sold to the authority at an agreed fixed price. This investment model would not be subject to approval by the State Procurement Board.

He also further said Matongera was not the accounting officer as shown by the agreement between NSSA and Drawcard, which stated that Elizabeth Chitiga was the representative of NSSA, hence she was responsible for everything.

Magistrate Nduna postponed the matter to today for continuation.