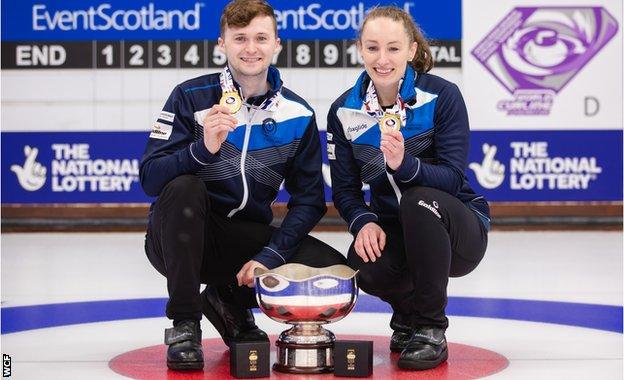 Starting off the Winter Olympics will be a "surreal" moment, says Team GB curler Bruce Mouat as he and playing partner Jen Dodds prepare to compete in the mixed doubles.

The pair face Sweden at 12:05 GMT on Wednesday as the Beijing Games get underway two days before the official opening ceremony in Beijing.

Mouat and Dodds are world champions and good prospects for a British medal.

"It's quite exciting we get to start off the Team GB run," Mouat said.

"There's a lot of excitement building at this point and we're getting to know some of the other athletes that are here. It's great to be part of the bigger team and getting to start it off is a surreal moment."

Like the summer Olympics in Tokyo, the Games are taking place in a bubble to try to stop the spread of Covid-19.

Athletes are subject to daily testing and masks must be worn when not competing, with no travelling outside of accommodation and venues allowed.

"Each day and test that goes by you feel more settled," Dodds says.

"You can more focus on the competition. Because until we left it was more: 'let's just not get Covid'. Since we've been in the village it's been a lot more relaxed."

The curling will take place in the National Aquatics Centre, which has been transformed having hosted the swimming and diving at the 2008 summer games in Beijing.

Mouat and Dodds, both from Edinburgh, will also compete in the men's and women's team events in the second week.

"People know we play at this high standard so they are going to raise their level," Dodds says of the mixed doubles competition.

"But on the other hand they need to raise their level because they know the standard we're going to bring if we're at our best. But we're not going to be phased by that.

"We know if we play our best we can be up there competing with anyone, that's what we have to focus on."