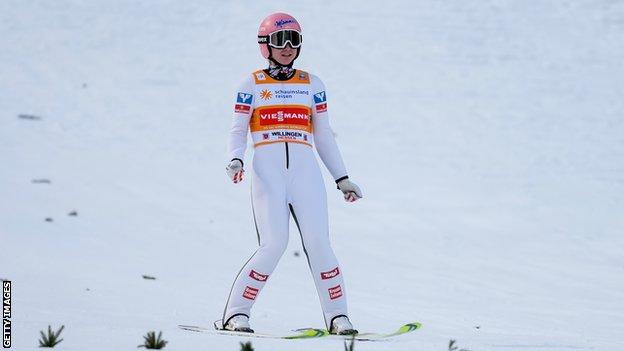 Kramer, 20, was due to compete in the women's ski jumping event which starts on Saturday.

Meyers Taylor, 37, a medallist at each of the past three Games, is world number one in both two-woman bob and monobob. She is currently in isolation in Beijing with qualification for her first event starting on 10 February.

Kramer, who has dominated this season's World Cup events, expressed her disappointment at having to withdraw.

"No words, no feelings, just emptiness," she wrote on social media. "Is the world really this unfair? The last years I have prepared for the Olympics. I have put in so much energy and time in it to make my dreams come true.

"Now it feels that my dreams are gone within one day."

Covid-19 has already ruled out or affected a number of athletes and teams in the build-up to the Games with China pursuing a zero-tolerance strategy, cancelling nearly all international flights and adopting a number of other health measures for the Games.

All participants have to deliver two negative tests prior to their departure, arrive only on charter flights and then be tested daily while also adhering to strict health regulations throughout their stay.

Russian skeleton racers Nikita Tregubov and Vladislav Semyonov will also miss the Games after testing positive before setting off.

Biathlete Valeria Vasnetsova is another whose Olympic hopes have been dashed after the Russian tested positive twice on arrival in the Chinese capital.

Canada's figure skating champion Keegan Messing's participation is in doubt after he failed to produce two negative PCR tests prior to travel. The 30-year-old is hoping to compete in the team event which begins on Friday.

The arrival of the president of the French Olympic Committee Brigitte Henriques and chef de mission Nathalie Pechalat has been delayed after they tested positive for the virus, while short track speed skater Sebastien Lepage tested positive on arrival in Beijing. ZANU PF has said former Local Government Minister, Saviour Kasukuwere will not be rejoining the ruling party mainly because of his behaviour. The s..