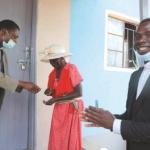 A WhatsApp status by a United Methodist Church pastor has resulted in the positive transformation of a 91-year-old widow’s life.

Reverend Energy Mudzedze, Pastor-in-Charge of Mutambara East of the United Methodist Circuit, had made a routine pastoral visit to Gogo Anamay Chihowo Munazvo of Matendeudze Village in Chimanimani District when he was touched by her appalling living conditions.

He posted a photo of himself standing beside Gogo Munazvo’s dilapidated grassed-thatched kitchen hut, pleading to well-wishers to chip in with any form of assistance for her to get decent accommodation. Said Rev Mudzedze:

It was during my routine section visits to homes of members of Matendeudze Section Two where I saw the need at Gogo Munazvo’s homestead. There was a need for proper and decent accommodation for Gogo Munazvo.

I placed a WhatsApp status message on my phone. This resulted in the coming on board of a number of well-wishers to assist Gogo Munazvo. As Christians, we are torchbearers, and the world counts on us.

He said the response from both church and non-church members was huge as donations and pledges started to pour in.

Through the contributions, a two-roomed structure was constructed and handed over to Gogo Munazvo last week on Saturday, with UK-based, Mrs Gondo going on to donate US$500 for the construction of a kitchen hut.

Gogo Munazvo was at a loss of words and failed to utter anything as emotions got the better of her during the handover ceremony.

She stays alone and has no child following the death of all her three children.

Faith with works ,am impressed much by this Pastor

God is good all the time,these are the works of Jehovah jairei,Rev Mudzedze goodness and mercy shall follow you all the days of your life.Shaloam.

May God bless you Rev Mudzedze and all thoz who lended a helping hand....To God be the glory

To God be the glory

Way to go to everyone who helped, thank you ndatenda

Glory to God, l was without shelter and you built one for me....

Thank you my son for real application of your postoral work...

There is no god. Gods don't exist. Peoplewho did this are pretty great. Good luck to them

Thanks for the help.God bless you

may God bless you