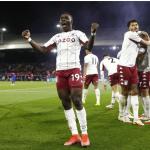 Aston Villa fans have said their team’s performance in the past two games shows how important Marvelous Nakamba is to the blue and claret army.

Nakamba who was in impressive form since the arrival of new coach Steven Gerrard who took over from Dean Smith has been on the sidelines after suffering a knee injury that is likely to see him out of action for up to 16 weeks.

Gerrard recently told the media that the Zimbabwean national had successful surgery. He added:

Villa has not found its winning formula of late, and fans feel that the former Club Brugge defensive midfielder is the missing link. One fan said on Twitter:

Damn we’ve missed @Nakamba_11 in these past two games.

Since the 1-0 defeat at the hands of Liverpool on 11 December, the match in which Nakamba got injured, the Villains have only won one game against a lowly-rated Norwich (0-2).

All other matches – against Chelsea (1-3 on 26 December), and against Brentford (2-1 on the 2nd of January), have been defeats.

Commenting after the loss to Brentford yesterday, one fan pointed areas that needed immediate attention. Said the fan:

Need a new LB, winger & DM (to compete with Nakamba and cover, Luiz isn’t a DM) minimum to be anywhere near where we want to be.

While indirectly admitting that injuries and COVID-19 are affecting Villa’s performance, a frustrated Gerrard said the team showed “no grit, no fight, no one showing the right aggression,” against Brentford. He added:

It was too easy scoring against us today. We’ve conceded three chances and let in two goals.

We can’t use [injuries and Covid] as an excuse. It’s on all of us to cope and survive. We should have picked up something from the game, that’s what we’re disappointed with.

This league is brutal at the best of times. It’s going to be an opportunity for players to step up, but I’m not sure there were any positives today. I’m sick of saying it was a good performance [after a defeat].