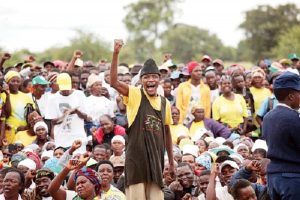 The Youth League of the ruling ZANU PF has pledged to defend “the revolution” in the upcoming by-elections scheduled for the 26th of March.

In the upcoming by-elections, we believe in protecting and defending the revolution. We will support our leader President Mnangagwa.

The league said it is strategising and mobilising party structures to deliver victory for the party in the upcoming by-elections and ultimately 2023 harmonised elections.

They also said they will embark on a process to inculcate party values to the youth by working with the Chitepo School of Ideology.

Hahahaha Pamberi ne ZANU... Chi ichocho?When people are now slaughtered by Potholes @Gokwe the Combi had to spin after hiting a pothole.Sometimes i think this whole revolutionary War was just a joke,if only we kept living under the British Colony we could have been the best Southern African most developed country in all sectors.

Thank you very much sit down

You are a lost soul

For sure....we can't allow a puppet government sent by the west

It's nolonger the revolution you are defending;but ED and army of thieves around him interest.You were supposed to have guarded the ethos of liberation by not allowing the incumbent President ED,to forcibly removing Uncle Bob.To my perspective the War Vets sold out by dining with the Devil.The comrades could not have allowed the coup leaders to ursup the power from Bob.🐕