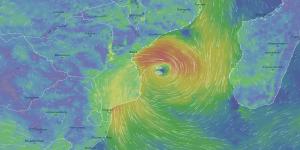 Media reports in Mauritius indicate that an intense Tropical Cyclone is brewing in the Indian Ocean, about 5 000km east of the island.

Weather experts are currently monitoring moderate Tropical Storm Batsirai which has intensified to a Tropical Cyclone and may reach Mauritius in February.

The Meteorological Services Department (MSD) on Thursday said it will continue monitoring the situation and advising members of the public. It said:

The current system being monitored, Tropical Cyclone Batsirai, is still 5 000 kilometres to the east of the country and may only reach Mauritius in February.

We are still in the main rain season as well as the South-West Indian Ocean Cyclone season, thus, more rainfall is anticipated.

Meanwhile, Tropical Depression ANA has dissipated, with rainfall of below 50mm recorded across the country on Wednesday. The MSD said:

Cyclones are natural, they are now becomimg more ferocious due to global warming. Zve njuzu & mermaids is all fables. But dont forget that cyclone CCC has landed and it will leave a trail of destruction among the cruel, evil and corrupt.

Baba I'm talking from experience. Its hard for those who are into occultism to agree with me on this but thats the fact.. Its a sacrifice they all know but you be forced to say something contrary. Pa bridge remuna Vungu river (btwn gweru and shangani) koitika ma accidents akawanda but inzwimbo iribho why? People in and around gweru go there to worship mermaid inogara few meters from the bridge then in return it makes sacrifices for them and that's the same with cyclones. I was in the field, strange things surrounding cyclones made me resign.

US$0 Harare
nunu 5 months ago

i do believe so kuti those cyclone hve got masprits ejuzi

@gundamendwa that's what you were taught..e.g almost everyone can operate a computer but a few can program it.. The manufacturer through its workers (programmers) they create a user interface which is user friendly. On user interface there's only information they want you to know, the secrets belong to them. That's the same as this MSD thing. Make a research my brother this is not what you hear or see. Why do they use names of dead relatives? The world is corrupt in every way and don't be fooled by these so called scientists. A cyclone starts from the ocean youya kuland yoperera ikoko futh.. Mostly inobva from the other side ichicrosser pa land ichienda kune imwe ocean n dzemazita echikadzi dzouraya vanhu, dzechirume hadzidero.

i wldd like to sync with @Bruce that all cyclones are associated with marine spirits, if not then why haven't we heard kuti pane cyclone yatanga in-land, not ku-ocean?

on the issue of naming, all cyclone names are prenamed so whoever discovers it first picks the name from the list

@gundamendwa that's what you taught..e.g almost everyone can operate a computer but a few can program it.. The manufacturer through its workers (programmers) they create a user interface which is user friendly. On user interface there's only information they want you to know, the secrets belong to them. That's the same as this MSD thing. Make a research my brother this is not what you hear or see. Why do they use names of dead relatives? They world is corrupt in every way and don't be fooled by these so called scientists. A cyclone starts from the ocean and yoperera ikoko futh n dzemazita echikadzi dzouraya vanhu, dzechirume hadzidero.

Information that I have just received is indicating that Ana was actually married to Batsirai but because of infidelity, Ana ran away from their matrimonial home in the Indian Ocean. She is said to have left a trail of destruction in her flight. Her whereabouts are currently no longer known.
The husband, after searching fruitlessly for her in the depths of the ocean, has decided to come out as well and check for her.
Hence, the current brewing of Cyclone Batsirai.

You are right Vax ,ndozvandakadzidza

apa manyepa apo. cyclone names are named by MSDs of before they do commenced. There is a list of names where they pick from. DO A PROPER RESEARCH.

Who gives names to these cyclones, storms 🤔. Batsi😩

Very interesting. Why are these cyclones given Shona names?

@Bruce...tell me more. It seems interesting to get to know that it has some spiritualities behind

The one who anotanga kuiwona ndiye anoipa zita but there are guiding principles in naming a cyclone or a storm. Its has a lot to do with ******. Every cyclone with a female name inoparadza compared neye zita rechirume. When i was studying metrology i discovered that its not all about what you see but it has a lot to do with marine spirits. Every cyclone is caused by a queen or a king mermaid... Go and find more
I resigned bcz its was against my principles and beliefs, m now a teacher at Anderson.