"We Want Zimbabweans To Work In SA, It's Their Home," - Malema 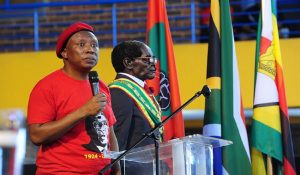 EFF leader Julius Malema has appealed to employers to give South Africans preference as the country faces an all-time high youth unemployment rate of 66.5% but also said no one should stop employing Zimbabweans.

He made the remarks this Wednesday when he toured some restaurants to establish the employment ratio of South Africans versus that of foreign nationals. He told journalists after visiting restaurants in the Mall of Africa in Midrand:

We want to make an emphasis to the owners of restaurants that no-one should stop employing Zimbabweans and say the EFF said they don’t want them.

We want Zimbabweans to work in SA. It is their home. They should make no apologies about hiring Zimbabweans or any other African brother or sister. In doing so, they must be considerate that there are locals who must at all times be given preference.

Malema was initially barred from entering Kream restaurant with a manager handing a letter telling the politician that he would not be allowed inside.

He was eventually let in and commenting after the incident, he said Kream leadership apologised for their misbehaviour and blamed it on their legal department that had allegedly given the order.

Malema added that the EFF was pushing for the protection of the rights of South Africans and to make sure local citizens are prioritised when it comes to employment.

He added that they are, however, not saying “our Zimbabwean, Lesotho, eSwatini and fellow African brothers and sisters should not be employed.”

This is happening amid rising tensions with locals already pushing for the ouster of foreign nationals who were “stealing their” jobs.

The South African government has terminated the Zimbabwe Exemption Permit facility and asked current holders to make sure that they apply for other permits appropriate to their particular status to ensure that eligible Zimbabweans can regularise their stay in SA.

We are coming camarada Malema

True bush lawyer . But we have to sober up and fix our zim let us find each other .hazvichaiti izvi vana vanopiswa ku south uko nezvavakudakuitika

I KNEW THAT CDE MALEMA WOULD NOT CATEGORICALLY CHASE AWAY ZIMBABWEANS BECAUSE OF HIS HOME PROXIMITY TO ZIMBABWE.

MALEMA COMES FROM VENDA LAND. ZIMBABWE SHARES BORDER WITH SOUTH AFRICA ALONG LIMPOPO. IT IS NOT SURPRISING THAT SOME OF HIS RELATIVES NAY BE LIVING IN ZIMBABWE.

KREAM RESTAURANT MANAGER WAS LAWFULLY RIGHT TO DENY MALEMA ENTRY. IT IS A PRIVATE PROPERTY WHERE ENTRY IS BY CONSENT OR INVITATION.

MALEMA'S LOGIC IS RIGHT THAT GIVE SOUTH AFRICANS PRIORITY BEFORE THEY EMPLOY FOREIGNERS.

ZIMBABWEANS ARE CROSSING IN DROVES INTO SOUTH AFRICA IN SEARCH OF GREENER PASTURES. IN ZIMBABWE THE PASTURES HAVE BECOME YELLOW WITH POVERTY.