We Must Beat Malawi At All Costs - Zemura 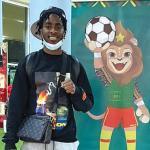 Warriors and Bournemouth utility player Jordan Zemura has finally joined the squad in Cameroon ahead of the African Cup of Nations (AFCON) match against Malawi tomorrow, a game he said they have to win “at all costs.”.

The 22-year-old arrived in Cameroon on Tuesday night and was received and accompanied from Yaounde to Bafoussam by Zimbabwe Football Association (ZIFA) technical director, Wilson Mutekede.

Zemura trained with the rest of the squad from 5 PM on Wednesday despite enduring a five-hour road trip from the capital, Yaounde to Boufassam, where the Warriors are based. Said Zemura:

This is a match we have no choice going into but to collect the maximum points. We have to go as a unit, just like was the case against Senegal, defend well, play well and score goals.

The truth is every match at a tournament is tough, the competition is stiff and you need to be smarter.

This is a match that we should win at all costs. It feels like it will be a final given the destiny of both teams relies mainly on the outcome of this game.

We have always talked about reaching the knock-out stages and that hinges on the outcome of Friday’s match.

That’s interesting, it means a lot to us as players and to the whole of the country.

We will have to fight for each other and see to it we get the result our badge deserves.

Zemura missed Zimbabwe’s Group B opener, a 0-1 to Senegal after testing positive for coronavirus at a time he was preparing to fly out of England for AFCON.

However, from the stats above, the average rating of both these teams is at 33.33% & that might be a draw, however we must win this game as both teams survival hangs on the results of this game, pari tricky guys but we must win it at all cost

Reply Report Abuse
No. 10 5 months ago