We Have Nothing To Do With ZANU PF - War Veterans 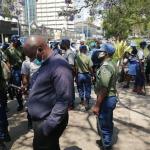 Members of the War Veterans’ Welfare Pressure Group (WVWPG) have distanced themselves from ZANU PF, saying they are not concerned about the ruling party’s affairs.

Forty (40) ex-combatants who are WVWPG members were arrested on Tuesday in Harare for protesting against the $16 000 per month pension stipends they are currently getting.

They were taken to various police stations in Harare and charged with inciting public violence.

They are being represented by Tinashe Chinopfukutwa, Paida Saurombe and Blessing Nyamaropa of the Zimbabwe Lawyers for Human Rights.

WVWPG chairperson Amos Sigauke said the heroes of the armed liberation struggle were disappointed with ZANU PF’s lack of concern for their welfare and henceforth, their “political marriage” with the ruling party was over. Said Sigauke:

We are not attending [the ZANU PF Annual People’s Conference currently underway in Bindura] because we are not ZANU PF. We have nothing to do with ZANU PF. We are not involved in ZANU PF politics.

We are not even a ZANU PF faction. ZANU PF has its own problems, which we are not concerned with.

If there is anyone among us who wants to attend the ZANU PF rally, they can go in their own capacity.

We are not concerned about their affairs. What we are concerned with is for government to consider our plight and review our monthly earnings.

If government addresses our concerns, then you will not see us here.

The war veterans that were allegedly protesting in town are just a few individuals with their own views detached from the position of the association which is affiliated with our party.

The ZNLWVA is the latest wing that joined to form our party and we are working well with them.

If there were issues with regards to the members’ affiliation to the party, the chairperson Comrade Mutsvangwa would have notified us.

So far, there are no complaints as far as membership of the war veterans in ZANU PF is concerned. War veterans are part of the proceedings of the conference underway.

Yes I agree that the warveterans are the worst suffering people in Zimbabwe compared to other warvets in nerbouring
countries,no houses,no farms or villages,no medical care,in towns most of them are lodgers and the $16000 they are getting can't pay rent because the landlords need their rent in US dollars,least the Government which they put in power don't care about them.That does not mean they must abandon their party,the party is not for the leaders,hence leaders come and go.

Just a few. The rest wallow in poverty eg the late Cde Vhuu

No farms uhmm they got 10farms each

THESE GUYS MUST NOW COME OUT IN THE OPEN AND INFORM THE PUBLIC WHO THEY SUPPORT POLITICALLY BECAUSE IT IS THEIR CONSTITUTIONAL RIGHT TO ASSOCIATE OR DISASSOCIATE WITH ANY GROUP OF THEIR CHOICE.

Those are lies. We have abandoned them and they no longer have our support at all. We fought for freedom not oppression of our own people. This has to stop or else something bad will happen. I have warned you and be warned because we strongly condemn violence