We Have Gone Back To The Smith Regime - War Vets 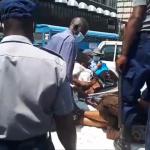 War veterans who were arrested in Harare on Tuesday for protesting over paltry stipends said the country has regressed to the Rhodesian era where they were not allowed to freely air their grievances.

The protesting ex-combatants, who are members of the War Veterans’ Welfare Pressure Group (WVWPG) and drawn from across the country’s provinces, accused President Emmerson Mnangagwa’s government of neglecting them.

A war veteran from Mvurwi, Obert Hazvinei Machingura, said the former combatants were holding protests because of false promises made by Mnangagwa’s government. Said Machingura:

We have seen other groups, including the ruling party itself, being permitted to conduct protests, but we are being blocked,” Machingura said.

We have gone back to the (late former Rhodesia Prime Minister Ian) Smith regime. We are not allowed to speak.

Why is it so hard for the authorities to allow us to submit our petition to the President?

We are wallowing in poverty, but we contributed immensely to the liberation of the country.

Some of us lost limbs, relatives and homes to free the country, but what is the reward for that? Nothing.

Another war veteran, Mildred Chimurenga, who came all the way from Kwekwe, said the arrests were an indication that there was limited freedom of expression in the country under Mnangagwa. She said:

Government should be committed to improving our welfare the same way we dedicated our lives to the liberation of this country.

We have been reduced to beggars when we deprived ourselves of some freedoms and opportunities to enrich ourselves and chose to go to war. However, only a few are enjoying the benefits.

MDC Alliance leader Nelson Chamisa said war veterans deserved respect and instead of harassing and terrorising them, the government should address their grievances.

About 40 ex-combatants were detained at Harare Central Police Station after they gathered at the Africa Unity Square to protest over the $16 000 monthly allowances they are getting from the government.

Others were detained at Rhodesville and Borrowdale police stations.