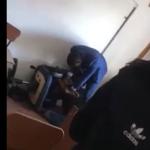 The Zimbabwe Republic Police (ZRP) has confirmed the arrest of a Harare teacher who violently assaulted a student. A video of the teacher assaulting the learner was shared on social media this Thursday. In a statement, the police said the assault took place on 14 October 2021 at Harare Einstein Tuition Centre. Pindula News presents the police statement.

The ZRP confirms the arrest of Michael Freeman Chingwaru (39), a maths teacher at Harare Einstein Tuition Centre for assaulting a student (18) at the same institution on 14/10/21 at 1030 hrs.

The lower sixth student was found in the ordinary level class seeing (watching) some movies during lesson time and ordered to go to his class.

Instead, he went to a Biology classroom and coincidentally met the same teacher where a harsh exchange of words occurred resulting in the teacher assaulting the complainant. School authorities are urged to ensure that peace prevails in learning institutions at all times.

Watch the vide below for more details.

There were divisions during Education Bill debates with some legislators saying that the legislation will likely encourage learners to misbehave as it sought to ban corporal punishment.