WATCH: "People Have No Confusion About The Name," - Fadzayi Mahere 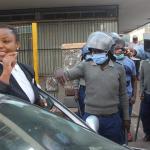 MDC Alliance national spokesperson, Fadzayi Mahere, has said the electorate has no confusion about the names MDC-T and MDC Alliance saying the 2018 election demonstrated that.

This comes as MDC-T leader, Douglas Mwonzora has written to the Zimbabwe Electoral Commission (ZEC) informing the electoral body that no other party was allowed to use the name MDC Alliance or other MDC derivatives in an election.

Meanwhile, MDC Alliance led by Nelson Chamisa has hinted at changing the party’s name ahead of the March 26 by-elections. Watch the video below for more.

Sacifices have to be made when starting on a clean slate. This might include giving up current parliamentary seats. Evenbif Mwonzora fill them up, he wont have them for long. The name change must be a product of inclusive consultations and not the dictatorial whims of one Mukomana and his side-dish Mahere. Mukomana hides behind secret strategies to dodge accountability and shut everyone else out of participating. These delaying tactics are meant to build a name / personality cult around himself. The name issue is straight foward. It must be changed. Anything with MDC acronym in it will be subject to court proceedings. Mwonzora haana vanhu but he has the support of the courts and the State. Even when registering a company, your company name must not be similar to or bear any resemblance to existing company names. So Mwonzora can easily win the name issue.

I agree with you Jimmy. How can you recall someone coz he/she no longer belongs to your party, then you claim to be the leader of the party that he/she has defected to. I may not be a Law fundi but this defeats all logic. The truth is Zanu pf wants to completely destroy the MDC brand, by using Doglas to hold on to the MDC name knowing very well that come election time he wont win anything. As said by Mahere, we have no confusion about the diffence between MDC-T and MDC Alliance names, saka NHM ne MDC Alliance.

@Independent Political Supremo, thank you for the heads up. Quite right!The Chamisa camp knows very well the political effects of participating in the By-Elections under a new party name. It's political suicide for Chamisa to succumb to Mwonzora's pressure of forcing him to have his candidates contest the by-elections under a new party name, with Mwonzora taking over the MDC Alliance name in the By-Elections. What this means is that the Chamisa camp technically surrenders the sitting MDC Alliance MPs to Mwonzora, who becomes the leader of the largest opposition party in terms of parliament representation. This will leave the Chamisa camp (new party) with only a paltry number of seats from the March 26 By-Elections. It's like Mwonzora is planning a "hostile take-over" of the MDC Alliance party.

SUPREMO THANX FOR SHEDDING LIGHT ON THAT THAX

Fadzai Mahere, your father is Zanu Pf and he is/was a permanent secretary in some Ministry. Iwewe Fadzai your were opposed to Chamisa and the MDC when you contested as an independent candidate in Mt Pleasent in 2018. You attacked Chamisa numerous times for being a male Chauvinist because Mukomana treats women badly especially his wife who is older than him and over the way he treated Thokozani Khupe. Surprisingly you were imposed into the Alliance via the the backdoor ahead of Luke Tamborinyoka. Maybe its your proximity to Thabani Mpofu but Thabani Mpofu was an ardent Zanu Pf supporter at the defunct GZU in Masvingo. Anyway Mahere the MDC under Mukomana wako has no connection with the grassroots and your boy is also a treacherous coward. You will not win...

I think Nelson Chamisa (and his MDC Alliance party) is a very clever and forward looking politician. In my view, their strategy is to rename their party immediately after the forthcoming By-Elections. The reason for this strategy is pretty straight forward : Assuming they chose / decide to contest in the election using a name other than MDC Alliance and they go on to win all (or some of) the seats in the By-Elections. This move alone will present Mwonzora with a numerical adavantage in parliament based on the existing number of MDC Alliance, since Chamisa's "new party" becomes a separate party (and ceases to be the "official" MDC Alliance). Armed with the aforementioned numerical advantage in terms of parliamentary seats, Mwonzora will then claim to be the leader of the largest opposition party albeit through the back door - paving way for a GNU with the ruling party and subsequently leading to the postponement of 2023 General Elections. This is probably the reason why Mwonzora has indicated his intention to contest the By-Elections under MDC Alliance name, and pushing Chamisa to name / form a "new party" in the process. That alone has the effect of diluting Chamisa's seats in parliament as his "new party" will only be having seats won from the 26th March by-elections. Chamisa is well aware of this brutal snare, hence he will not name a new party - at least for now. In view of that, the timing of naming a new party is critical, Chamisa would rather do that after the By-Elections. As things stand right now, Chamisa and his MDC Alliance are likely to field their candidates for the By-Elections on MDC Alliance ticket and fight Mwonzora head-on. In my view, this is the most appropriate strategy available to Chamisa and his party.

@ INDEPENDENT POLITICAL SUPREMO, thank you for your thoughts. Unfortunately, I don't see how the MDC-T or MDC-Alliance or whichever else MDC that falls under the control of Dougie (given the courts' ruling on MDC Alliance) would then sit back and not recall those whom they have not recalled to date (given they were part of the original MDC-T in the MDC Alliance) if they felt like doing so if they feel that they would be aligning themselves with Chamisa even after the forthcoming by-elections. It's high time Chamisa started building his own house using his own bricks as opposed to relying on bricks that he has limited control over. He should have used his tours of the country to introduce his new party name, colours and manifesto to the electorate.

These are the last kicks of a dying horse. The mdc party is already dead, no wonder they keep fighting for a name instead of important things.like fixing the rot in MDC run councils

Zita is now taking too long

@ Madam Spokesperson: ingochinjai zita racho kani! Asi nderemushonga here? With so many possible permutations and combinations of words featuring "democracy" why are you giving the impression that you have run out of names? Hereunder are some pointers. How about calling yourselves Zimbabwe Democratic Party? Labour Party? Progressive Democrats?