WATCH: In My Heart... I Realised That Apartheid Was Wrong - FW de Klerk 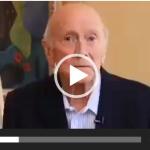 He is the one who negotiated a peaceful transfer of power to a Black-led government under Nelson Mandela.

In a video released Thursday by his Foundation, FW de Klerk, in his final words said apartheid was wrong. He said:

Since the early 80s, my views changed completely… In my heart of hearts, I realised that apartheid was wrong.

Watch the video below for more details.

Anyway if fw deklerk later realized he was wrong , that's the best thing for himself...those Left behind must do more to justify the white mans repentance and realization that black or white humans are equal

Absolutely true. Never wish death of someone else

Wishing someone to die is bringing a curse to yourself brother, never do that again you give satan a good headstart in the spritual court