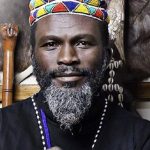 A former Seventh Day Adventist (SDA) pastor, Joshua Maponga has said he relocated to Zimbabwe amid allegations that he was deported for allegedly possessing a fake South African passport.

According to Izwe Lethu, Maponga relocated to Zimbabwe after South Africans told him to go back and stop getting involved in South African issues as his country was in trouble. Speaking on the latest development, Maponga said:

The Zimbabwean public speaker, author, philosopher, leader, Pan Africanist, musician, and social entrepreneur was based in South Africa for over 20 years.

Long live Maponga keep up reminding our lost brothers who fail to negotiate who they are from colonial destruction and cultural imperialism. We need to preserve African ethnic and be identified as who we are.....