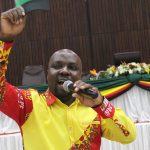 Tsenengamu was speaking at the launch of FEEZ in Harare, a year after his expulsion from ZANU PF for “naming and shaming” political elites and businesspeople choking efforts to revive the economy by engaging in corruption.

However, Tsenengamu failed to contain his emotions and choked as he begged Zimbabweans and God for forgiveness. He said:

I as Godfrey Tsenengamu was a member ofZANU PF. I joined that party at a time when I loved it and had an agenda to build my nation too.

There are a lot of things I did when I was in Zanu PF, good and bad. I come before those whom I did wrong and ask for your forgiveness, I mean what I did wrong in thought, action and planning, may you please forgive me.

I will not say what others did, but confess what I did. I am not doing this to make anyone happy, but to ask for salvation and forgiveness from God.

I come before all Zimbabweans in earnest. God, you are the one who knows my heart, give me strength. I am not begging you to support me, but give me an opportunity to have a new lease of life.

Watch the video below for more details.

Tsenengamu was fired from Zanu PF on 4 March last year.

MY ADVICE TO EVERY YOUTH IN ZIMBABWE REGARDLESS OF POLITICAL AFFILIATION PLS MY BROTHERS AND SISTERS DO NOT BE USED BY ANYONE TO PERPETRATE VIOLENCE ON ANYONE WHO HOLDS THE SAME ID CARD AS YOU .WHO IS SUFFERING AS YOU FOR ANY POLITICAL LEVERAGE..VAMWE VAKAPARA NGOZI IN 2008 FOR POLITICAL MILAGE BRINGING BAD OMEN TO THEIR FAMILY LINE AND TO THIS DAY THEY CANT FIX IT..

IN THE WORDS OF THE GREAT FATHER ZIMBABWE HIMSELF JOSHUA NKOMO

"ZIMBABWE WILL NOT DIE THE YOUNG PPL WILL SAVE IT"