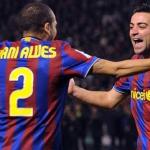 Brazilian right-back, Dani Alves, 38, is back at Barcelona where he will be playing under his former teammate, Xavi Hernandez.

Barcelona announced on Friday that the veteran defender will be returning to the club as new coach Xavi Hernandez’s first signing.

Alves has been a free agent since leaving Sao Paulo in September but is ineligible until the transfer window opens early next year.

He played for the Camp Nou outfit between 2008-2016 when he lifted the Champions League title three times alongside Xavi. Watch the video below for more.

Barcelona announced his return in a statement:

Barcelona and Dani Alves have reached an agreement in principle for the player to join the football first team for the remainder of the current season. The Brazilian will be joining training from next week but will not be able to play until January.

In the Catalan capital, he made the right-back slot his own across eight seasons, making 391 official appearances and scoring 23 goals. Alves has also played for Brazil, winning six major titles, most recently the Tokyo Olympic Games, where he lined up in the final against what are now his team-mates Oscar Mingueza, Eric Garcia and Pedri.

Barca deserves more than this,this is a mockery of the once revered institution dont they have a developmental squad to select players from,hope Xavi himdelf wont be tempted to feature as player coach kkkk