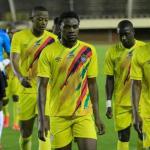 The Warriors ended their miserable FIFA 2022 World Cup qualifying campaign with a whimper after being held to a 1-1 draw by Ethiopia in Harare on Sunday.

This means that Zimbabwe failed to register a single victory in six matches, the only team that failed to win in Group G.

Coach Norman Mapeza made five changes from the team that lost in South Africa on Thursday.

Kudakwashe Mahachi scored the opener in the 36th minute, striking from long range to beat the goalkeeper, who was off his line.

Ethiopia equalised in the 86th minute when Abubakar Ahmad evaded his markers and beat the advancing keeper before slotting home the equaliser.

The result, meanwhile, stretches Zimbabwe’s winless streak to eleven games across all competitions.

The whole team should be fined & spend a night behind bars. Maybe they'll learn to take football seriously...

US$0 Harare
Chapwititi 6 months ago

Loga was worse guys, let's call a spade a spade nevertheless zim football is just going nowhere because if we say backwards that will be a lie ,because in the past we were better.you can just imagine failing to live broadcast our own national match, that just tells the story more that hapana kwatiri kuenda it's even better kutorega bhora racho then we try muchongoyo