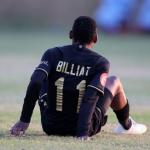 Warriors legend Innocent Chikoya has questioned the decision taken by Khama Billiat to quit playing for the national team a few months before the Africa Cup of Nations (AFCON) finals.

The Kaizer Chiefs star announced his retirement from international football on Monday night, just over 24 hours after Zimbabwe drew 1-1 with Ethiopia in a World Cup qualifier played at the National Sports Stadium.

Speaking to the Siya crew, Chikoya, a former Orlando Pirates and Warriors left-back, said he was disappointed to have learnt of Billiat’s retirement. He said:

I think Chiefs benefitted. To be honest with you, he was supposed to just continue until after the AFCON, which is now in January.

Those are the only games left because there’s no international football until then and it is such a big tournament.

Zimbabwe have been drawn in Group B alongside Senegal, Malawi and Guinea in the continental showpiece, and Chikoya expected Billiat to captain the side. He said:

Everybody cherishes playing at the AFCON, but Khama decides to quit. Perhaps it’s the burden of playing for a big brand like Chiefs and then still having to travel to represent his national team.

But there is no one in the local game from Zimbabwe who can give what Khama is giving the national team.

I was surprised to find out in our group chat with Zim legends. I don’t think this was a wise decision, in my opinion.

There is AFCON – go! Enjoy yourself and then retire afterwards, give your best and then call it a day. You retire a hero.

Chikoya believes Billiat decided to quit the national team so that he could revive his form at Amakhosi following complaints that he was missing a lot of matches due to injury while he was earning big money. He added:

Maybe he’s trying to revive his career and trying to be the Khama that people know. His performance has not been what we are used to for a number of years, it’s only now that he is – being at his best and concentrating on club football.

It could also be about securing his future with Chiefs, as we know he signed a two-year contract recently (in July). Maybe it’s his age, and he feels he’s given enough for the national team. I don’t know.