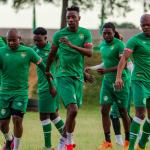 The locally-based Warriors players will leave the country for their penultimate FIFA 2022 World Cup Qualifier against South Africa at 11.40 AM this Monday.

Zimbabwe’s foreign-based players will travel directly to South Africa from their bases ahead of the match to be played at FNB Stadium on 11 November at 9 PM.

Meanwhile, the South African Football Association (SAFA) has been granted permission by that country’s government to allow 2 000 fans to watch the match from the stands.

Here is the squad that the Warriors technical team has named for the match against South Africa:

US$0 Harare
Madala Banda 6 months ago