Warriors Drop Out Of Top 120 On FIFA Rankings 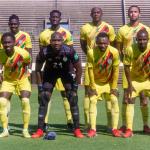 The Warriors have continued their downward spiral on the FIFA rankings following poor performances in the just-concluded 2022 FIFA World Cup qualifiers.

The latest FIFA rankings indicate that Zimbabwe have slid three places down as they are now ranked 121 from 118 in the world.

In Africa, they are ranked number 29. The Zimbabwean women are ranked 119 in the world.

The Warriors were beaten 3-1 away by Ghana before they lost 1-0 to the Black Stars at the National Sports Stadium.

Zimbabwe also lost 1-0 to South Africa away prior to playing out a 1-1 draw with Ethiopia in their final match of the qualifiers last Sunday to finish bottom of the log with just two points.

Meanwhile, Senegal remained the top-placed team on the continent while Belgium retained the top spot on the global ranking.

The end-of-the-year FIFA World Rankings will be released on 16 December.