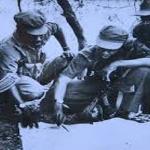 He joined the liberation struggle in 1972 after being recruited by the late General Solomon Mujuru at St Albert’s Mission in Mt Darwin.

Chirongwe said they had forwarded a request for Nhamo to be accorded National Hero Status.

Nhamo first received military training in the battlefront and was later sent to Tanzania where he received further training at Mgagao military academy.

He became a member of the Zanla General Staff in 1974 and operated in Mt Darwin Muzarabani and Rushinga.

Nhamo was part of a group that attacked Altena farm together with General Mujuru. He survived the epic five day battle at Mavhonde in Mozambique.

He was also part of a group of fighters who established Zhunda and Nyadzonia refugee camps together with the likes of Tracy Sarudzai Chakananga, Tsanangurai popularly known as Cde Tsana Cde Dadirai, now Brigadier General Chitsungo, the late Timothy Gutura, Charles Saudi among others.

At Independence, Nhamo joined the National Army signals and communication but later retired on medical grounds.

Mourners are gathered at house no 1500 Highway Glendale. He is survived by a son Maxwell and daughter Memory.