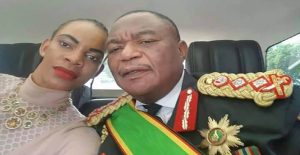 Harare regional magistrate Mr Lazini Ncube Friday dismissed Marry Mubaiwa’s application for discharge at the close of the State case and put her to her defence.

Mr Ncube in his judgment said there are issues that the former model needs to explain which arose from State witnesses’ testimonies.

Mubaiwa is charged with violation of the Marriages Act after she allegedly misrepresented that Vice President Constantino Chiwenga consented to solemnise their wedding during the time he was ill.

Mubaiwa, through her lawyer Ms Beatrice Mtetwa, chose not to take to the witness to testify and closed her defence case.

Ms Mtetwa told the court that there is no law that compels her to testify in her defence. She said:

The State led by Mr Tafara Chirambira told the court that although Mubaiwa decided to remain silent in her defence case, she will still be subjected to questioning by the State. He said:

As a matter of procedure, we will proceed to put questions to her. If she decides not to answer, the questions will be placed on record.

In dismissing Marry’s application, Ncube said the State had proved its case beyond reasonable doubt that Mubaiwa forged Chiwenga’s signature on a marriage certificate in a bid to upgrade their customary union.

Ncube said she would on February 10 rule on whether Mubaiwa had a right to remain silent.

This comes a day after a High Court judge ruled that her customary union to the Vice-President ended in 2019 after she was given a US$100 divorce token as per traditional custom.

,,,Harare regional magistrate Mr Lazini Ncube Friday dismissed Marry Mubaiwa’s application for discharge at the close of the State case and put her to her defence,,,

Ncube said she would on February 10 rule on whether Mubaiwa had a right to remain silent.

MY QUESTION IS WHAT GENDER REALY IS THIS NCUBE