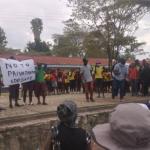 Students at the Anglican-owned St Faith’s High School teamed up with disgruntled members of the community to besiege the parsonage and forcibly evict the school principal Reverend Daniso Muchichwa on Saturday afternoon.

Rev Muchichwa was being accused of orchestrating the removal of the school headmaster Anold Makamba and his deputy Irvine Mudangwe.

Muchichwa was given up to midnight to move out of his official residence or risk the wrath of the demonstrators.

Students armed with logs and switches scaled up the precast wall while others pelted security guards who were restraining them with stones, The Manica Post reported.

The security guards were forced to retreat and abandoned the gates open to let the boys out after some members of the community charged at them.

The rioters charged toward Rev Muchichwa’s residence, chanting songs that denounced the proposed privatisation of the school while threatening to beat up the clergyman.

Some started throwing stones on the roof of his house, while others destroyed his garden.

Anglican Diocese of Manicaland registrar and spokesperson Ashel Mutungura confirmed the violent disturbances at the school.

They are inciting students at our school. Why do people resort to violence when there is an ongoing process to engage them?

After all this drama you will see what is going to happen.

The disturbances came after the diocese “fired” the headmaster and the deputy head on allegations of abuse of office.