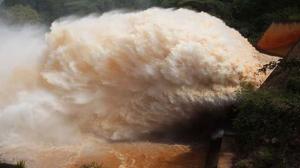 Villagers in Insiza in Matabeleland South province have expressed concern after Sinqobile Dam burst its wall, releasing to waste much-needed water that would be hard to find in the dry seasons.

The dam that was built on a farm in the 1950s is a lifeline for both livestock and people who were resettled there just over a decade ago.

Resettled villagers have tried to rehabilitate the water body on their own to no avail, hence they are worried that if no lasting intervention is found, dry seasons may negatively impact livelihoods.

The dam that is located along the Zibomvu river in Insiza’s Ward 22, village four, has two dam walls that villagers built, but have been destroyed due to the sheer force of the river’s water.

Mr Japhet Dube, a member of a committee charged with finding a solution to the dam challenge, told the Chronicle that there have been efforts by villagers to rehabilitate the dam but they are not sustainable. He said:

ZINWAa came to help us to fix the spillage wall in 2018. In 2019 the wall was destroyed and we tried again in 2020 and it was destroyed. This area was filled with water all this while and we have tried to fix it every year. This dam was built in 1953 and it has not had any maintenance ever since. We are the only ones who have tried to fix the dam.

When the rains came to this area, we had the dam wall that was collecting water for us. We have a committee that takes care of this dam wall and we bought about 40 bags of cement to fix it. However, our efforts were in vain because now the wall has been destroyed by the rains.

He said some villagers were not willing to cooperate making it difficult to have enough manpower. Dube projected that the dam will be dry by June a situation that will force them to travel some 20km to the next source of water.