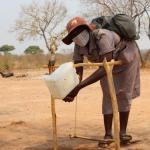 Civic organisations have implored the government to seriously consider increasing allowances paid to village health workers (VHWs), who have been essential in ensuring that rural people have access to healthcare services.

They are currently paid US$15 a month, with US$1 being deducted towards bicycle payments.

These allowances are supposed to be paid per quarter, but most payments were last made more than a year ago.

In a statement, the Community Working Group on Health (CWGH), which represents more than 20 organisations that deal with health issues, said there is a need to improve the welfare of VHWs in Zimbabwe. Said CWGH director Itai Rusike:

Zimbabwe has slightly over 10 000 VHWs out of a national need of about 30 000, hence some VHWs, especially in resettlement areas, cover a large catchment area cycling distances of up to 30kms.

Instead of working just three days a week and three hours a day, they are on duty 24/7 because of the low numbers.

The Government should seriously consider an upward review of allowances paid to the Village Health Workers and this should be supported by provisions in the national health budget.

In the early years, all VHWs equally benefited from incentives such as uniforms, bicycles and allowances as this was catered for in the national health budget.

We wish for the best things are tight

US$4.00 Harare
Chahototo 6 months ago

$15 inokundwa neya house girl kana mufudzi wemombe. To make the matters Worse the few cents are not bieng paid. This current government is failing to pay its workers yakadhakwa