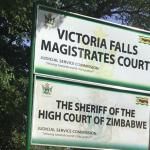 A 49-year-old Victoria Falls woman who was found in possession of 481kg of mbanje (marijuana/dagga) with a street value of more than ZWL$48 million has been sentenced to 10 years in jail.

Patricia Ncube of Mkhosana suburb was charged with unlawful possession of dagga.

She pleaded not guilty to the charge but was convicted after full trial when she appeared before regional magistrate Collet Ncube.

The magistrate sentenced Ncube to 10 years in jail before suspending three years for five years on condition of good behaviour.

She will serve an effective seven years in prison.

Prosecutors said police raided Ncube’s after getting a tip-off that she was in possession of dagga at her house.

On the 28th day of April at around 10 AM police detectives raided Ncube’s residence and recovered 14 x 50kg bags of mbanje which was hidden in her bedroom.

The mbanje weighed 481kg with a street value of $48.1 million and it has been forfeited to the State.

There were also twists of mbanje that were found hidden in a container in the same house.

Ncube was represented by Givemore Mvhiringi of Mvhiringi and Associates.

Straight business is very best ! 7 yrs behind bars its a tough way to go .

Straight business is very best ! 7 yrs behind bars its a tough way to go .

US$0 Harare
Rastaman vibration 6 months ago

14 are 50kg sacks not weight of mbanje.. Remember,mbanje is much lighter than maize meal so they can't have both equal number of sacks n weight.

Wonder how the snitch feels for getting a 49 year old lady 10 years in jail....shame on you

The same 49 year old broke the law by selling marijuana the same drug that's turning youths into drug junkies. She got what she deserved. No to drugs and drug peddlers must be punished

Say no to drugs zim

The Zimbabwean government should legalize marijuana

What about the white guy alao caught with dagga and high-tech drug processing equipment? Case been dragged and did not sleep in cells for a single day,akatouya ku court achitobva kumba kwake zvake.