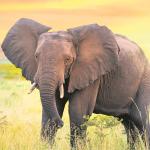 A bartender was trampled to death by an elephant in Victoria Falls near the main police station in the early hours of Sunday as he was walking home from work.

The man, only identified as William by local residents, is said to have come across three elephants that had a calf.

A security guard at the Landela Complex, which is close to where the man was killed, said the incident happened close to the police compound. He said:

I was walking towards that road when I heard elephants trumpeting and this was followed by a loud bang as if something had dropped, or a tree had fallen.

At the scene, I found a few people and some cars at the scene and they told me that William had been trampled to death by an elephant.

I discovered that he had been gored by the elephant on his stomach and his body was thrown about 40 metres away.

It seems when it gored him, he was carrying a loaf of bread and a wallet.

We were able to again identify him through the national identity card that he was carrying.

According to police officers who witnessed the incident from their houses nearby, the now-deceased tried to escape to the police compound.

A police officer told Zimbabwe Parks and Wildlife Management Authority (Zimparks) rangers who attended the scene around 9.30 AM that the bartender used to pass by their houses every morning after knocking-off from work at one of the bars in town. Said the officer:

These elephants for the past one month have been crossing through this road going to the suburbs.

As this fellow walked to his house, he encountered them and one of the bulls attacked him. We heard some loud noise and screams.

When we went out to investigate we discovered that he had been killed.

Frustrated residents accused Zimparks of ignoring their pleas to have the wild animals pushed away from residential areas.

Zimparks spokesperson Tinashe Farawo told VicFallsLive he was yet to receive a report about the incident.

Last month, a Victoria Falls Anti-Poaching Unit conservationist was trampled to death by an elephant bull as he conducted anti-poaching duties around the city.

Why do most Zimbabwe spokespersons always say " I have not yet received a report on the incident". Police spokesman, covid coordinator, zimparks spokesman etc, same denial messages. Saka hu spokesperson hwacho huri payi😂

It happens if you decide to settle territory me mhmumhuka..