Vehicle Plates Backlog Expexted To Be Cleared In December 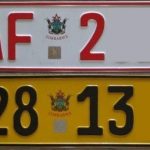 Authorities say the backlog in issuing number plates is expected to be cleared by next month as enough raw materials have been secured for the manufacture of the plates.

The scarcity of foreign currency to import the equipment needed for the manufacture of number plates has been causing the backlog.

Central Vehicle Registry (CVR) head Mr George Makoni Friday said there were three batches of equipment that are being imported. He said:

We have 37 000 sets that came in three batches. Another batch is expected end of November and that consignment is made up of all sizes of number plates and the total number is 115 500.

Mr Makoni said people could quickly access number plates from wherever they were, especially at post offices countrywide.

Director of Transport Management in the Ministry of Transport and Infrastructural Development Dr Joseph Pedzapasi said they were focusing on clearing the backlog and other motorists will be attended to later.

By September last year, CVR had issued over 20 000 number plates since July 2020 and extended working hours as it battled to clear the backlog of nearly 50 000.

Number plates cost US$80 and it takes two to five days to secure them. Cases of reported crimes committed by people using unmarked vehicles have been rising in recent months.