Veganism Becomes New Way Of Life For Many Zimbabweans 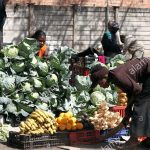 Vegetarianism is gaining traction in Zimbabwe at a time the world celebrates World Vegan Day which comes every year on 1 November, Anadolu Agency has reported.

Veganism is a lifestyle that excludes all animal products and attempts to limit the exploitation of animals as much as possible.

According to local nutritionists and environmentalists, veganism is of immense benefit to humans and the natural environment.

Vegans are the true practical example of what people should do when they want to lead healthier longer lives. They hardly contract diseases like cancer, diabetes and many others.

For Zimbabwean environmental experts like Doson Hamandishe, vegans are helping to save the environment. Said Hamandishe:

They plant fruit trees for their fruits which is part of their diet, and this means trees are safe with vegans as they practice afforestation.

They also don’t eat meat or any animal products, meaning wildlife is safe in the hands of vegans, as they grow their own vegetables throughout the year.

As vegetarianism gains fame across Zimbabwe, vegan restaurants are emerging in major cities like Harare, Masvingo and Victoria Falls.

In Harare, there is the Chisipite vegan restaurant owned and run by Mikaela, who is vegan.

Business is booming for Mikaela, with many affluent clients coming to the restaurant and Harare’s high-profile residents eager to change their life around with a plant-based diet.

But for residents from the low-income suburbs of Harare, like 24-year-old Elina Chuma, nothing is fascinating about eating vegetables because she said vegetable-eating is a sign of poverty. Said Chuma:

In my family, we rarely have meat, not because it’s by choice, but because we can’t afford it. Yet we also would love to eat meat every day if we could afford it.

… I battled high blood pressure as a teenager and after getting advice on diet from a close friend who is a vegan, I said let me give it a try and here I’m now with zero blood pressure.

Global Vegan celebrations are attributed to Louise Wallis, who proposed the idea in 1994 as Chairman of the Vegan Society in the UK and now Vegan Day is celebrated in different parts of the world to advocate veganism and its way of life.