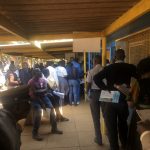 The Progressive Teachers Union Zimbabwe (PTUZ) says the Government’s decision to pay civil servants the COVID-19 risk allowance in United States dollars (USD) does not meet teachers’ expectations as it does not address their grievances.

According to a government circular released by the Public Service Commission (PSC) dated 4 January 2022, civil servants and pensioners would be paid their COVID-19 allowances in foreign currency with effect from January 1 2022.

In the past, the allowances, which are pegged at US$75 and US$30 to civil servants and pensioners, respectively, were converted at the interbank rate and paid in Zimbabwe dollars. They will now be paid in hard cash.

PTUZ secretary-general Raymond Majongwe said the offer is meant to silence civil servants who have been demanding their salaries in US dollars. Said Majongwe:

The COVID-19 allowance is the same as before but is coming under a different name. What we want as teachers is enough money to take care of our families and pay bills.

The USD$75/ US$30 is merely the government trying to silence us and not addressing the real challenges.

In the event that we accept the allowance, then that means there should be a monthly increment until we reach the October 2018 salaries.

Chairperson of the Apex Council, Cecelia Alexander, said they are yet to meet the government to discuss the recently announced risk allowance. She said:

Civil Service Apex Council (CSAC) is yet to meet with the government for further discussion so as to officialise the issued statement on the COVID-19 allowance for the public service workers and pensioners.

Civil servants have over the past few years demanded the restoration of their pre-October 2018 salaries that were set at just over US$500 per month.

I ADMIT THAT PTUZ AND I, ARE BOTH GOING TO INDIA IN THE SAME BOAT. THIS COVID19 RISK ALLOWANCE IS MEANT TO SILENCE THOSE WHO HAVE BEEN DEMANDING SALARIES IN US$.