US$500 Reward Offered For Recovery Of Missing Child (5) 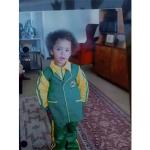 Police in Bulawayo are looking for a 5-year-old child, Kristie Wheeler, that went missing on 26 September this year.

Zimbabwe Republic Police (ZRP) spokesperson for Bulawayo Province, Inspector Abednico Ncube, has appealed for information that may lead to the recovery of the child. Said Ncube:

I can confirm that we received a report of a child who went missing after her mother allegedly disappeared with her on 26 September this year.

The father of the missing child, Glenn Wheeler said his former lover, Perseverance Ncube, ran away with their child in violation of a court order. Said, Wheeler:

I won a court order for the custody of the child Kristie that I share with her.

After that Perseverance approached me and asked to have a child for two days a month and I agreed.

I got worried, I then went to check where she stayed in Cowdray Park suburb, I only found her mother and she expressed worry, saying her daughter disappeared with the child.

He said he reported the matter to Cowdray Park police base on 27 September.

Wheeler is offering a US$500 reward for anyone who will supply police with information that will lead to the recovery of the child. He added:

There is a reward of US$500 for anyone who will supply police with information that may lead to the recovery of the child.

I’m desperate for the child and she is supposed to start Grade One next year.

And right now, I don’t know how she is surviving because her mother is not gainfully employed.

I don't work for this shit. Find your wife from relatives

Nhai hanti ana mai wake wherever she is.