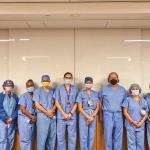 US surgeons say they have successfully given a pig’s kidney to a human in a transplant breakthrough they hope could ultimately solve donor organ shortages.

The procedure was done at NYU Langone Health in New York City using a kidney that came from a pig that had been genetically modified to stop the organ from being recognised by the body as “foreign” and being rejected.

The recipient was brain-dead, meaning they were already on artificial life support with no prospect of recovering.

The family of the recipient consented to the experiment before she was due to be taken off of life support.

US regulator the FDA has approved the use of genetically modified pig organs for this type of research use.

For three days, the new kidney was attached to her blood vessels and maintained outside her body, giving researchers access to it.

He said the kidney made “the amount of urine that you would expect” from a transplanted human kidney, and there was no evidence of the vigorous, early rejection seen when unmodified pig kidneys are transplanted into non-human primates.

The recipient’s abnormal creatinine level – an indicator of poor kidney function – returned to normal after the transplant, Montgomery said.

A heart transplant recipient himself, Dr Montgomery says there is an urgent need for finding more organs for people on waiting lists. He said:

The traditional paradigm that someone has to die for someone else to live is never going to keep up.

I certainly understand the concern and what I would say is that currently about 40% of patients who are waiting for a transplant die before they receive one.

We use pigs as a source of food, we use pigs for medicinal uses – for valves, for medication. I think it’s not that different.

The work is not yet peer-reviewed or published but there are plans for this.

Experts say it is the most advanced experiment in the field so far.

Similar tests have been done in non-human primates, but not people, until now.

Using pigs for transplants is not a new idea though. Pig heart valves are already widely used in humans.

And their organs are a good match for people when it comes to size.

Hey they are many lop holes here,its too soon to celebrate.Why?Because recipient was brain dead and with no chances of recovery.So there are no records of possible side effects in the long run ,organ failure e.t.c.Seems like this generation of medical practitioners,scientists e.t.c are to quickly to conclude their tests, like what they did @ #Covid vaccines.

Thats great. I think these are the kind of initiatives we should embark on here in Zimbabwe. We have the resources and skills which can make it possible. Our tertiary learning institutions must be at the forefront of the researches. We produce the best minds in Zimbabwe so we can utilise that and make our country a great nation.
#Godisinit

Ummm this could make pigs more important and expensive...
But its a good innovation

Of which pigs are now expensive