US Fugitive Who Faked His Own Death Found Alive In Scotland 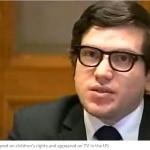 An American fugitive believed to have faked his own death is facing extradition after being arrested in a hospital in Glasgow on 13 December.

Nicholas Rossi, 34, was wanted by Interpol and faces a charge of rape allegedly committed in Utah in the United States in 2008. In 2018 the DNA review connected him to another sexual assault case in Ohio.

The FBI also had a warrant for his arrest on charges of defrauding his foster father by taking out credit cards in his name and running up debts of more than $200 000.

Police Scotland said he was detained under an international arrest warrant while he was admitted to the Queen Elizabeth University Hospital in December with COVID-19 – where he used the alias, Arthur Knight. Medical staff were unaware he was on Interpol’s red list.

Mr Rossi told US media in December 2019 that he had late-stage non-Hodgkin lymphoma and had weeks to live. Several outlets reported that he had died in February 2020.

The Utah County attorney’s office is now working with federal and international agencies to extradite Mr Rossi back to Utah.