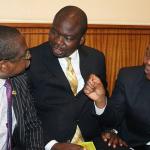 Civil servants and civil service pensioners will be paid their bonuses in foreign currency this year, a senior government official has confirmed.

Permanent Secretary for Finance and Economic Development George Guvamatanga revealed that civil servants will be paid their bonuses in foreign currency up to a maximum of US$700 and civil service pensioners will receive bonus payments of US$100 plus an extra US$80 for spouses.

Confirming the development in an interview with State media on Thursday night, Guvamatanga said those civil servants with pay scales requiring more than US$700 will get the balance in local currency. He said:

It is true that we are paying bonuses in US dollars. It is a once-off gesture by the President to civil servants and pensioners.

Guided by the developments in the market and taking into account the plight of workers and the need to cushion members from the adverse effects of fluctuations in exchange rates and also taking into account the proactive initiative by Government, Treasury advises that the 2021 13th cheque be paid in foreign currency (US dollars) at 100 per cent of the pensionable emoluments, capped at a maximum of US$700 whilst those with pay scales exceeding the balance of the 13th cheque will be payable in local currency.

In light of the foregoing, it is recommended that pensioners be equally cushioned on the basis of the following flat, once-off amount per each category: own right US$100, spouse US$80, child US$60.

The three officers were expected to work out what was required in each sector so that Treasury could make the preparations.

Guvamatanga said engagements with workers around the bonus offer should commence so that it is not seen as an imposition, but shows the consultative and negotiated process that the Government believes in.

He added that engagements with banks must also start now to ensure a smooth flow of payments.

All pensioners should be paid the bonuses because people contributed USD from 2009 to around 2019. Where did that money go. Pensioners are being paid peanuts how do you expect someone getting 3900 rtgs to survive in an economy like ours. 3900 is less than 20 USD. We need a pension and salaries reform urgently. If the Pension Funds cannot pay a living pension they should pay off a lumpsum and strike off some of the pensioners so that those left can get better payments. There should be a way out of this situation. We must have a minimum pension benefit which should be hedged against inflation to avoid sving too many old people unable to look after themselves when they retire. Our situation is very bad for for people who contributed part of their salaries for many in anticipation of a better old age life. The auditor general must make some audits to see why these Pension Funds are unable to pay a living pension when these people were contributing during their working days. The problem could be that may be a lot of these Pension Funds have been looted dry by the mafia. It's disheartening to note that all pensioners are living living like paupers at an age where one needs the money most. If financial statements are audited a lot malpractices could be unearthed. Pension funds own most highrise buildings in cities and they are collecting rentals in USD yet most if not all are paying sick money to thoes pensioners in their books.

I see ichinzi convert to ZWL

NASA should also pay pensioners their bonuses in US dollar