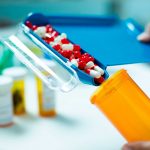 The clinic is tucked about 40km from Gwanda town behind a hill just after Mayezani shops in Gwanda North. Villagers from Mayezani have described Ms Mlotshwa as a God sent angel saving their lives.

Villagers told the Chronicle news crew that the clinic had saved so many lives since it was commissioned in January.

A villager, Ms Musawenkosi Moyo said she had to request that her daughter who had fallen ill in Bulawayo and was admitted to Mpilo Central Hospital be allowed to come to their rural home for treatment at the clinic.

The staff at the clinic prescribed medication for her and they bought the medicine at the same clinic.

Another villager, Mr Innocent Ndlovu said the staff at the clinic does thorough tests on patients unlike what is done at other clinics. He added:

Members of staff are very professional and know how to handle patients.

Area village head Mr Stanley Mlotshwa, said Ms Mlotshwa was her cousin and she initiated the construction of the clinic in 2018 to develop her home area.

Mr Mlotshwa said since the clinic opened in January, every Wednesday, a doctor visits the clinic to attend to patients.

He said despite the fact that Ms Mlotshwa is based in the US, she ensures the clinic operates smoothly.

Villagers used to travel to Gwanda or Bulawayo to seek treatment.

Mr Mlotshwa said all the clinic’s members of staff were locals.

Thus amazing ,only if we had more rich people with the same mindset.Giving back to the community .