U.S. Army To Immediately Discharge Soldiers Who Refuse To Get COVID-19 Vaccine 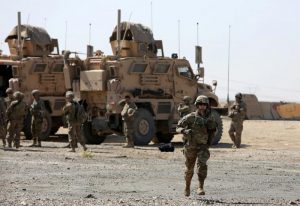 United States (U.S.) soldiers who refuse to get a COVID-19 vaccine will be immediately discharged, the U.S. Army said on Wednesday, saying the move was critical to maintaining combat readiness.

The Army’s order applies to regular Army soldiers, active-duty Army reservists and cadets unless they have approved or pending exemptions, it said in a statement.

The discharge order is the latest from a U.S. military branch removing unvaccinated service members amid the pandemic after the Pentagon made the vaccine mandatory for all service members in August 2021.

The vast majority of all active-duty troops have received at least one dose. Roughly 79 uniformed military personnel across the different services have died from the novel coronavirus. Army Secretary Christine Wormuth said:

Army readiness depends on soldiers who are prepared to train, deploy, fight and win our nation’s wars. Unvaccinated soldiers present risk to the force and jeopardize readiness.

Other branches of the U.S. military, including the U.S. Air Force, have already begun to remove those who have chosen not to receive COVID vaccines, which were first authorized for emergency use in December 2020.

There has been reluctance in some quarters, worldwide, to take the vaccine amid scepticism over its efficacy.

Ioking for some1in Harare knows when can l got smart soup

Inking for some1in Harare knows when can l got smart soup

Vaccine haiuraye iyi,only dandaheads think kuti rikabayiwa rofa.it is there to boost your antibodies so that they will overpower the virus when you get contact.

US$0 Harare
Lamar 3 months ago

i think you guys should really search on google " how covid vaccines work" make sure its in simple english also for your own understanding...dont hate on me

i knew a guy akatora vakisini iyoyo but then he contracted Covid and died within days so i wonder kuti inombonyatsobatsirei vakisini yavo iyi. the way i see it, as long as there is profit involved, there will always be lack of transparency from "big pharma" about the true nature of these medicines.. munhu ngaangotora ma protective measures pese paanenge ari - wash your hand regularly + mask up at all times outdoors.. some of us aren't even "vaccinated" but we have never contracted Covid

"putting others at risk.." Really? You can still contract the deadly virus even if you're vaxed...

Getting a covid jab is supposed to be voluntary.