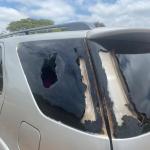 As of Saturday 13 November 2021, just over US$57 000 had been raised towards buying an armoured car for opposition MDC Alliance leader, Nelson Chamisa.

The organiser of the gofundme initiative, T Basvi, says the drive to buy Chamisa an armoured vehicle was triggered by “countless merciless attacks (on Chamisa) by the ruling party, aided by the government security sector.”

He cites an attack on Chamisa’s convoy on the 11th of October 2021 by a group of suspected ZANU PF youths as evidence that Chamisa’s life was in danger.
The attack left Chamisa’s vehicles damaged and many of his aides seriously injured and hospitalized. The convoy was on its way to engaging the rural community in Masvingo to understand their issues in the aftermath of the pandemic’s 3rd wave.
Basvi believes chances that violence will intensify during the 2023 elections are high hence the need to beef up Chamisa’s security before any unfortunate eventuality occurs. Basvi added:

He also said it was clear that the regime wants to continue to frustrate democracy by attacking the main opposition. On 8 November, US$47 000 had been raised via the initiative.
More: Pindula News

I REPEAT THAT WHILE THEY ARE ORGANISING FINANCES, THEY SHOULD AT THE SAME TIME ENGAGE A LEGAL FIRM OR A FREIGHT FORWARDING FIRM TO RESEARCH ON REQUIREMENTS FOR IMPORTING ARMOUR PLATED VEHICLES. IF THEY DO NOT DO THAT, THEY MAY BE SURPRISED BY ZANU PF SHENANIGANS. ZANU PF MAY PLAN TO TORPEDO ITS IMPORTATION OR DELAY ITS CLEARANCE BY ZIMRA UNTIL HARMONISED ELECTIONS ARE OVER, JUST TO FRUSTRATE MDC ALLIANCE.

You are an idiot! You always wish to get inputs every season you've never taken the initiative to buy inputs from your profits. You want to live your life at the benevolence of politicians? That's being stupid. That's why you sellout the country for inputs and food handouts. You are so pathetic

Chamisa is big joke. He lacks clue and strategy. He is a blind guide.